New installation at Human and the Machine Human and the Machine My new audio installation Loci will be up at the Georgia Theatre in Athens Georgia, Saturday, November 3, 2018. Loci is part of “Human and the Machine”, a one day event presented by Moogfest, with Kishi Bashi, Tall Tall Trees, Deantoni Parks, Lauren Sarah Hayes, and audiovisual work by REM’s Michael Stipe.

Human and the Machine is presented in conjunction with a2ru. 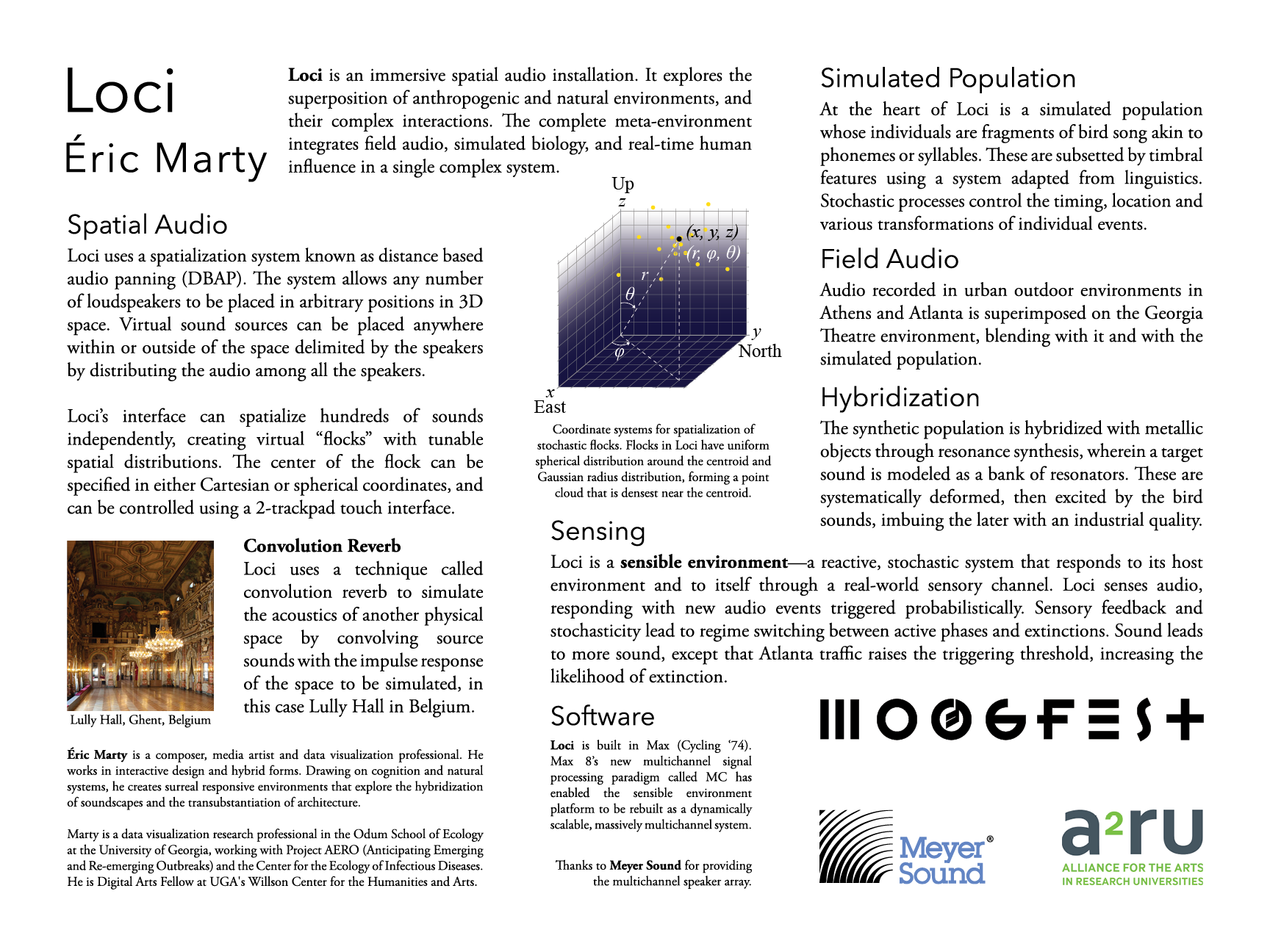 Intro to Sound and Data Sonification

Acoustics: (1) The branch of physics concerned with sound. (2) The properties of a concert hall with respect to the way sound interacts with it.

Psychoacoustics: The branch of psychophysics that studies the sense of hearing. Psychoacoustics defines, qualifies and quantifies sensations in relation to the stimuli (sounds) that cause them.

Sound: a mechanical vibration transmitted through a medium (usually air) to the ear, with an amplitude and frequency capable of being perceived by the auditory system.

IF A TREE FALLS IN THE WOODS with no one around, it does make a sound.

IF A TREE FALLS ON THE MOON, even with someone around, it does not make a sound. (Sound does not travel in a vacuum.)

Signal: any other vibration or energy variation that does not fit the definition of sound, even if the vibration or variation represents a sound. We commonly refer to electric and digital signals.

Analog-to-Digital Conversion (ADC): The process of sampling an analog signal in order to create a digital signal.

Digital-to-Analog Conversion (DAC): The process of converting a series of samples to a continuously varying (analog) electric signal.

(NOTE: technically, in the diagrams above, the transition from electric to sound is “transduction.”

Sample: (1) An individual number in a digital signal. The sample represents the intensity of a signal at a given time. The sample is to a digital signal as a pixel is to a digital image. (2) The length of time it takes for one sample to go by (depends on the sampling rate, but is usually a small fraction of a millisecond). (3) An entire bit of digitally recorded sound, stored as a series of numbers (A.K.A. a stored digital signal). This is also the popular usage of the term.

Notice, the term “volume” is not used. “Loudness” and Intensity are more precise. “Volume” is used in psychoacoustics to refer to an esoteric characteristic of sound, which could be described as its “fullness.” We will avoid the term “volume” for now.

Musical sound or pitched sound: a periodic sound (a sound with a definable frequency, hence with a definite pitch).

One notable example of how auditory perception should influence scale design is in the construction of pitch scales.

For a discussion, see: http://blog.ericmarty.com/7/perceptually-uniform-pitch-loudness-scales-for-data-sonification

The in-house family of higher-level tools built on top of Mike Bostock’s D3. Mike Bostock developped D3 at the Stanford Visualization Group, led by Jedff Heer. The lab moved to the University of Washington and became the Interactive Data Lab (IDL). IDL/Stanford Vis Group built the Vega declarative visusaliation language on top of D3, Vega-Lite (a simplified declarative language) on top of that, and is building a small suite of exploratory data analysis and design tools on top of Vega and Vega Lite. (IDL is also behind Tableau and the spinoff company Trifacta that makes it.)

The Vega family on GitHub

Here are a numer of third-party languages, environments and tools built on top of D3.

Compare to:
Tableau - desktop + online drag/drop visualization editor. Publish to web. Pro version is $1000. Free student license.). Tableau Public (also free). tutorials Tableau is NOT built on top of D3, but came out of the same group that made D3, and is based on Grammar of Graphics. So, it is conceptually similar to Plotly (and Vega). Orginally called Polaris, it was commercialized as Tableau when the Stanford/IDL group created the company Trifacta.

• D3 wrappers in other languages

Plotly also has API’s for the major scientific computing languages (Matlab, R, Python), so a round-about way to leverage D3 without actually using it.

• Other people’s lists of D3 based tools